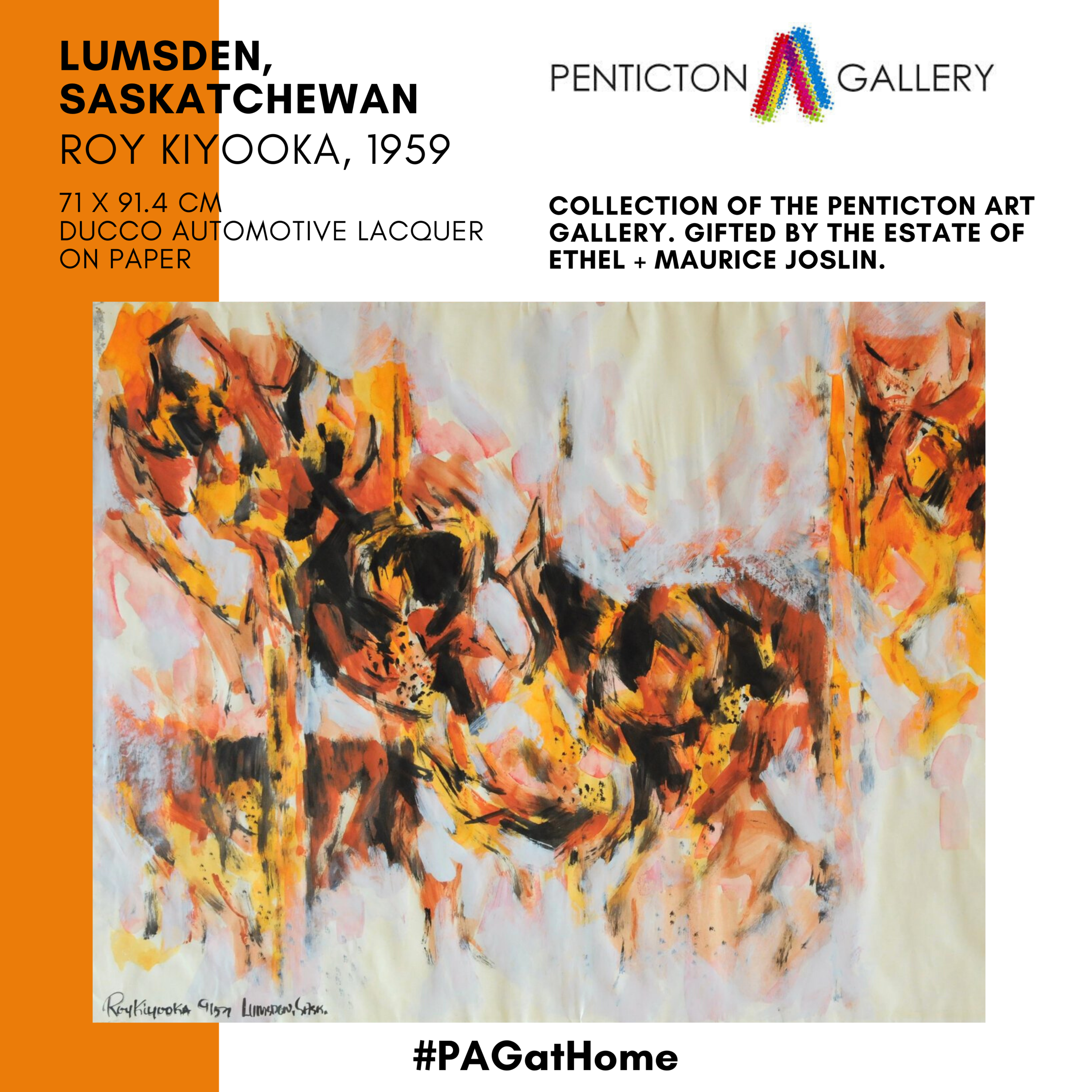 Roy Kenzie Kiyooka was a talented multidisciplinary artist who worked as a painter, poet, photographer, filmmaker, writer, musician, and sculptor. Kiyooka was born in Moose Jaw, Saskatchewan to parents of Japanese ancestry. He studied at the Provincial Institute of Technology and Art, now known as the Southern Alberta Institute of Technology and Art. In 1956, Kiyooka spent eight months in San Miguel de Allende in Mexico. Kiyooka was able to see the works of the great Mexican muralists Rivera, Orozco, and Siqueiros. Upon returning to Regina in the fall of 1956, Kiyooka began teaching at the Regina College, now known as the University of Regina.

Roy Kiyooka was a regular participant at the Emma Lake Artists’ workshops in the 1950s, and attended Barnett Newman’s famous workshop at Emma Lake in the summer of 1959, along with Clement Greenberg and Barnett Newman. Kiyooka accepted a teaching position in 1959 at the Vancouver School of Art.

In the early 1960s, Kiyooka began to explore abstract painting and experimenting with different materials. In the late 1960s, Roy Kiyooka moved away from his familiar medium of painting and became involved in poetry, photography, cultural animation, and conceptual art. Kiyooka played a major role in Vancouver’s cultural scene, including Intermedia, an artist’s run center. He organized poetry readings in Vancouver and later on in Montréal. A trip to Japan had stimulated a renewed interest in Japanese poetry and philosophy. Kiyooka published his poetry in a number of collections. The Pear Tree Poems (1987) was short-listed for a Governor General’s award. Mothertalk: Life Stories of Mary Kiyoshi Kiyooka, a series of interviews with his mother, was published after his death, in 1997, as was Pacific Windows: Collected Poems of Roy Kiyooka.

Roy Kiyooka had participated in the S?o Paulo Biennial of 1966 and in 1969 was commissioned to create a sculpture for Canadian Pavilion at Expo '70 in Osaka. The Vancouver Art Gallery organized a retrospective of his work in 1975. In 1978, Kiyooka was awarded the Order of Canada for his achievements in painting and his successes as a teacher. Kiyooka had a fruitful teaching career throughout Canada, including at Sir George Williams University (now Concordia University) in Montréal, in Halifax at the Nova Scotia College of Art and Design, and finally at the University of British Columbia from which he retired a few years before his death.